Lock this date in your iPhones!

By jparlane, posted in Announcements

Steve Wozniak is living proof that an idea can change the world.

In 1976, the University of California engineer created the first Apple computer, throwing open the doors to the home microcomputer revolution. Along with Steve Jobs, he revolutionised the future we now take for granted.

In May 2012, Woz will tour Australia and New Zealand to give a series of talks, his first half day seminars anywhere in the world, to discuss the story of Apple’s rise from suburban garage to one of the most powerful brands of our time.

Woz will share his reflections on Steve Jobs’ monumental legacy, and the way in which they together transformed not just the electronics industry but the very nature of global information exchange.

Join Woz for this unique insight into a radical company culture that spawned one of the great success stories of the modern age.

This is an unrepeatable opportunity to hear from a true corporate revolutionary and cult icon who has profoundly influenced the way the 21st Century lives, works and thinks!

Check out venue and times here.

Inspiration is coming to our shores!

With only a matter of days to go until Shankar Mahadevan, Ehsaan Noorani and Loy Mendonsa hit Australian shores, it is so exciting to be able to host the first ever Shankar Ehsaan Loy Australian tour and experience the magic of the Three Kings of Bollywood live!

For a software engineer turned music composer (Shankar), a guitarist (Ehsaan) and a keyboardist (Loy) with backgrounds in plays, television and jingles, the guys each bring a wealth of experience and talent to their trio.

This success, however, has not come without hard work. During the band’s first foray into composing, the movie director Mukul Anand died mid movie, with the film never to be released. The band then went on to compose for several more films that failed to get noticed. 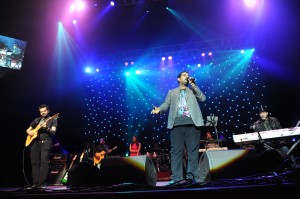 The turning point for SEL’s career was with the movie Dil Chanta Hai. This fame was also assisted by Shankar’s title track to his 1998 album of the same name “Breathless”. The song “Breathless” contains three minutes of a near endless stream of vocals, without a break or, it seems, a pause for breath! Have a listen to it here.

If you don’t know SEL by name, you’ll certainly know them by sound, and now every album they produce seems to just get better and better. When the band come together, they emanate an individuality, passion and excitement that ensures each project  and each concert is one wild ride!

Get your dancing shoes ready and join in on the fun. For tickets to see an unforgettable summer performance, click here.