Count Basie has been responsible for bringing the world the sounds of many talented musicians – a remarkable achievement for one person. During the early days of the Count Basie Orchestra, American Jazz Trumpet player, Buck Clayton was one such artist that would make his own unique mark on history.

Influenced greatly by Louis Armstrong, Clayton was a leading member of the ‘Old Testament’ Count Basie Orchestra. He was persuaded to join the band by Count Basie himself during a stop over in Kansas City, where the orchestra had residency at the Reno Club at the time. 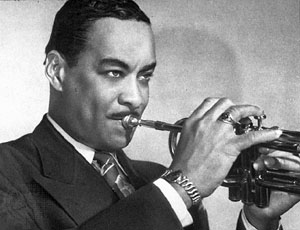 1937 saw the orchestra based out of New York where Buck Clayton freelanced in the recording studios. After being drafted for war service in 1943, he left Count Basie and was based at Camp Kilmer, as it was close to New York he had the opportunity to participate in a range of all-star sessions. After his discharge from service in 1946 he prepared arrangements for Count Basie as well as becoming part of Norman Granz’s ‘Jazz at the Philharmonic’.

For nine months in 1949 he went to Europe and led his own band in France. Touring  Europe again in 1953, this time in Italy, he played alongside clarinetist Mezz Mezzrow and Frank Sinatra.

In the world of jazz Buck Clayton was an iconic figure, and according to the Penguin Guide To Jazz he “synthesized much of the history of jazz trumpet up to his own time, with a bright brassy tone and an apparently limitless facility for melodic improvisation”.  Working as an arranger right up into the 80s, he died peacefully in 1991 at age 80 with an extremely successful career to his name.

Don’t miss this once-in-a-lifetime performance of the Count Basie Orchestra, the very same orchestra who nurtured the talents of Buck Clayton. Performances are strictly limited so don’t miss out on this unbelievable opportunity.

« The World’s Best
Swinging and Bopping »