Together with a 30 piece orchestra, Warlow and Prince have joined forces to bring a once in alifetime event to Australian audiences this 2014. For one night only, and fresh from sharing the stage together in the Broadway hit Annie, Warlow and Prince will be touring across Australia presenting an unforgettable evening of musical distinction.

Faith Prince first established herself as a Broadway star with her portrayal of Miss Adelaide in the 1992 revival of Guys and Dolls – a role for which she won the Tony Award for Best Actress in a Musical and the Drama Desk Award for Outstanding Actress in a Musical. Since then, she has also been nominated for Tony and Drama Desk Awards for her portrayal of Ella Peterson in the 2001 revival of Bells Are Ringing, and her feature in the 2008 Broadway musical A Catered Affair. Most recently Faith was seen as Mrs. Wilkinson in the second United States national tour of Billy Elliot the Musical (2010-2011), and in July 2013 joined the revival cast of Annie as Miss Hannigan.

Treat yourself to a night of Broadway magic and see these two stars shine for yourself. 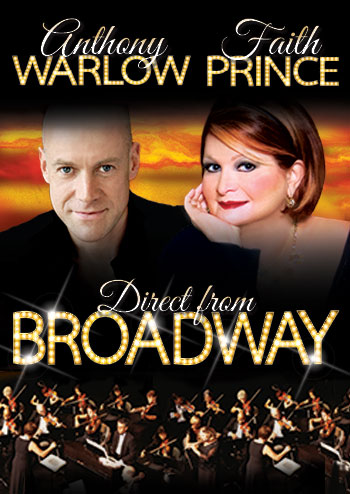