All You Need Is Love celebrates the songs that captivated a generation and fans get the opportunity of reliving their favourite Beatles’ masterworks brilliantly performed live by 4 extraordinary vocalists – Jack Jones, Ciaran Gribbin, Darren Percival and Jackson Thomasaccompanied by the Strawberry Fields Rock Orchestra.

The songs performed are carefully chosen from the Beatles canon for their instrumentation and arrangements involving a full orchestra seamlessly integrated with the Beatles own rock sensibility. The Beatles didn’t hesitate to pull in the best arrangers, guest musicians and producers of the day.

Producers Phil Bathols and Tim Woods have developed a following for their Beatles shows including Let it Be, The White Album Concert and Beatles Back2Back all of which bring together Australia’s finest musical talents on a mission to give the audience a faithful, live music experience of which the Beatles would have been proud had they been able to take their studio recordings out to concert halls with the advantages of present day sound technology.

From the intimacy of Yesterday to the exuberance of Sgt. Pepper’s Lonely Hearts Club Band and the breathtaking orchestrations of their producer and arranger George Martin in songs such as Eleanor Rigby and Across the Universe, these classics lay squarely at the heart of the Beatles universal appeal.

Don’t miss this spectacular summer celebration of musical excellence under the hallowed sails of the Sydney Opera House. 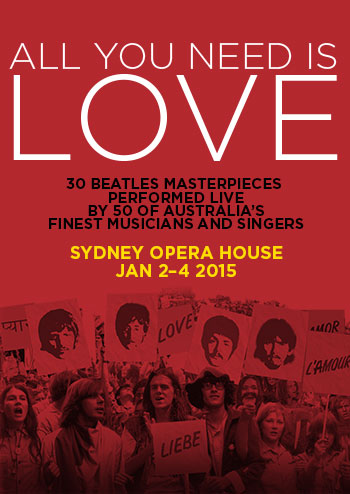