The living embodiment of swing, one of the most elegant and irresistible sounds that ever shook the western world, The Legendary Count Basie Orchestra will bring their 80th Anniversary Tour to Australia and New Zealand in May 2015.

Directed by veteran trumpeter Scotty Barnhart, the 18-piece Count Basie Orchestra features a peerless array of instrumentalists with combined credentials that have topped the upper echelons of the international jazz world for decades.

From Billie Holiday to Bing Crosby, Frank Sinatra to Nat King Cole, Sarah Vaughan to Ella Fitzgerald, the Count Basie Orchestra has provided the supremely distinctive sound and swing behind some of the greatest singers of the modern age.

Current members include a solid core of musicians hired by Basie, including saxophonist John Williams and trombonist Clarence Banks, as well as former members of Stan Kenton’s, Benny Goodman’s and Lionel Hampton’s ensembles.

Special guest vocalist is the remarkable Carmen Bradford, who has performed with artists including Tony Bennett, James Brown, Wynton Marsalis, Frank Sinatra and George Benson. Count Basie heard Bradford sing in the early eighties and immediately hired her as vocalist for his Orchestra, a role she has continued in to this day.

The tradition of excellence has continued beyond the Count’s passing in 1984 to make the Orchestra a permanent fixture in Down Beat and Jazz Times polls throughout the ’80s and ’90s. The latest of a total 18 Grammy Awards was bestowed as recently as their Count Plays Duke album of ’99.

Simply put, the Count Basie Orchestra is the real deal, a who’s who of swing spanning generations maintaining the flame of one of the world’s best-loved sounds. For Australian and New Zealand audiences, this 80th Anniversary Tour is a very special occasion and a rare chance to see a truly elite jazz ensemble staged in some of our most prestigious venues. Don’t miss these historic concerts! 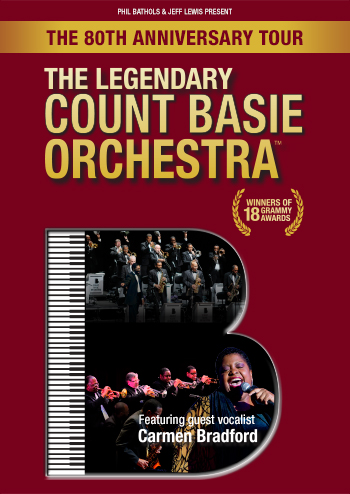