The award-winning star of Smoke & Mirrors, Hedwig and the Angry Inch and The Rocky Horror Show is back in a brand-new show that is as sexy as hell! iOTA takes his signature rock’n’roll vaudeville style to the next level to create a daring and innovative theatrical concert experience.

Co-created by director Craig Ilott, this darkly edgy show tells the story of B-girl, a troubled young woman trapped in a reality that is relentlessly grinding her down. Played by award-winning actress and music theatre star Blazey Best, as things get worse B-girl conjures up a vivid glam rock-fantasy where she escapes into the world of her alter-ego Clifford North (iOTA). He’s a gender-bending rising star who represents everything she isn’t – powerful, sexy, in control.

Dark, dirty and always entertaining, B-Girl’s transformation from violence and despair to arse-kicking triumph makes for a totally wild ride, travelling way past musical cabaret towards something new, fresh and exciting.

Driven by the energy of a live band on stage, iOTA and B-Girl bristle with passion, hope and the healing power of rock & roll. 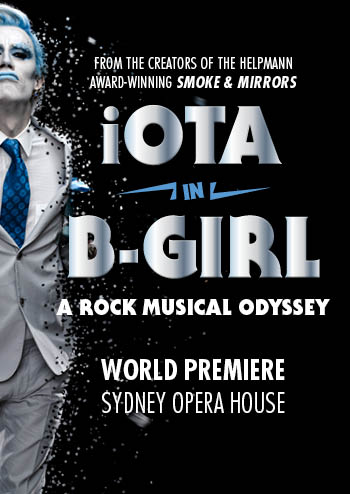