Bat Out of Hell

10 of Australia’s finest musicians honour the epic rock partnership of Meat Loaf and Jim Steinman as they perform the BAT OUT OF HELL album in its entirety followed by a set of greatest hits including I’d Do Anything for Love, It’s All Coming Back to me Now, Dead Ringer for Love and more.

34 years after its release, Meat Loaf’s BAT OUT OF HELL remains one of rock’s biggest and most unlikely hit albums. There is no other album like it – epic, gothic, operatic, and heavy rock. Jim Steinman was a composer without peer – no one before or since has mastered a mini-epic the like of Bat Out of Hell.

Hearing this legendary music performed live on stage is a rare treat. Don’t miss what promises to be an unforgettable ‘Classic Albums Live’ night of rock. 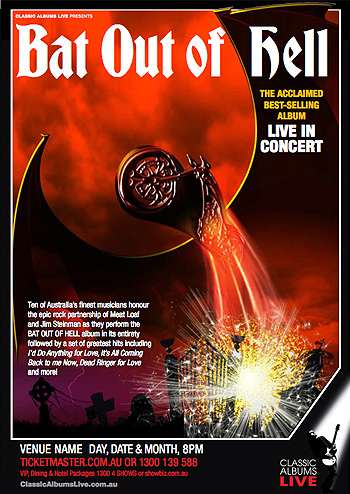