TOGETHER AND ALONE FOR THE FIRST TIME

Leo Sayer and Lulu two legends of British pop unite on stage for a special and rare concert tour. While this is Lulu’s first ever tour to Australia it also will be her very first time performing together with Leo Sayer in a full concert programme.

Lulu was the wee woman from Glasgow with the huge lungs who went toe to toe with the big boys and frequently came out on top. On the scene since rock ’n’ roll went pop in the mid 60’s. The raw-throated emotion of her calling card To Sir with Love was the theme song she sang for the film starring Sidney Poitier and in which she also appeared.

Singer songwriter Leo Sayer has also enjoyed a career spanning decades. Throughout the 70s he was a relentless hit-making machine with his first seven singles reaching the top 10 and culminating in a coveted Grammy Award.

This June 2016 Lulu and Leo join forces in concert for the very first time to deliver more hits than you can fit into a juke box. Performing their greatest hits and more both solo and in duet. Hits that helped define the ’60s, ’70s and beyond including To Sir With Love, When I Need You, Oh Me Oh My, You Make Me Feel Like Dancing, The Man Who Sold the World, More than I can Say, The Boat that I Row and so many more.

DON’T MISS THESE TWO EXTRAORDINARY ENTERTAINERS SHARING THEIR CHERISHED SONGBOOKS LIVE ON STAGE TOGETHER AND ALONE, IN AN UNREPEATABLE EVENING DRAWING ON THE GREATEST MEMORIES OF POP’S GOLDEN AGE. 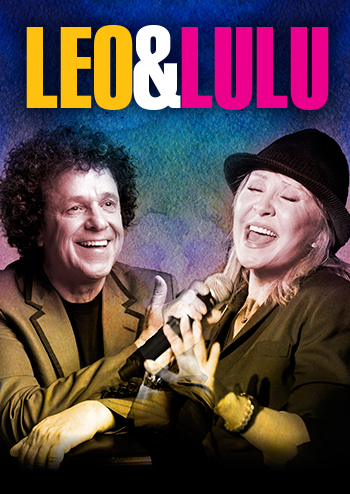