ONCE IN A LIFE TIME CONCERT EXPERIENCE

The living embodiment of swing, one of the most elegant and irresistible sounds that ever shook the western world, The Legendary Count Basie Orchestra will perform a strictly limited run of concert hall performances in October.

Directed by veteran drummer Dennis Mackrel, hired by the late Count himself, the 18-piece Count Basie Orchestra features a peerless array of instrumentalists with combined credentials that have topped the upper echelons of the international jazz world for decades.

From Billie Holiday to Bing Crosby, Frank Sinatra to Nat King Cole, Sarah Vaughan to Ella Fitzgerald, the Count Basie Orchestra has provided the supremely distinctive sound and swing behind some of the greatest singers of the modern age.

Special guest vocalist is the remarkable Carmen Bradford, who has performed with artists including Tony Bennett, James Brown, Wynton Marsalis, Frank Sinatra and George Benson. Count Basie heard Bradford sing in the early eighties and immediately hired her as vocalist for his Orchestra, a role she has continued to this day.

Simply put, the Count Basie Orchestra is the real deal, a who’s who of swing spanning generations to maintain the flame of one of the world’s best-loved sounds. For Australian audiences, this is a once-in-a-lifetime event, a truly elite jazz ensemble staged in some of our most prestigious venues. 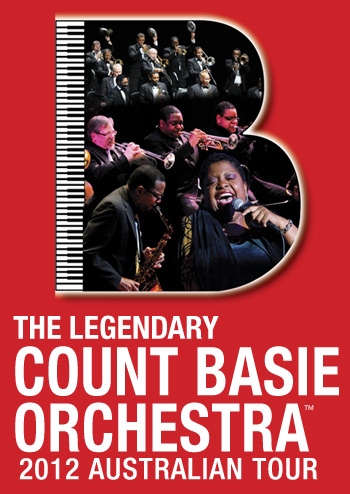