Cat Stevens, the name brings back a thousand memories – dark eyes, a winning voice and songs which the whole world sang along to. Back in the 70s Cat Stevens was the ultimate rock star. Talented, charismatic, with a seemingly endless succession of beautiful melodies streaming from his imagination, the one-time teen idol turned international singing star had everything. He sold more than 60 million albums, earned enough money to last several lifetimes, and enjoyed all the trappings of fame.

But he wanted more out of life. So at the height of his career he shocked the world by taking his last bow. The music stopped and Cat Stevens was no more. Whatever became of the man who wrote Father and Son, Moon Shadow and Where do the Children Play? Why did he turn his back on the world?

Peace Train is a night of music and story-telling which will strike a chord deep inside the heart of anyone who longs for something more; A journey back in time, recreating the sights and sounds, seeking out the man in the music and telling the story behind the songs.

Then, of course, there is the music. Hear twenty-three hits sung with remarkable authenticity by one of Australia’s most exciting young artists Darren Coggan, backed by a high-energy band. From First Cut is the Deepest, to Remember The Days Of The Old School, Lady D’Arbanville, Sad Lisa and Peace Train, Darren Coggan traces the path of a man who never stopped wondering about how to make the world a better place.

Peace Train, the Cat Stevens Story has had audiences on their feet, cheering for more at every stop. 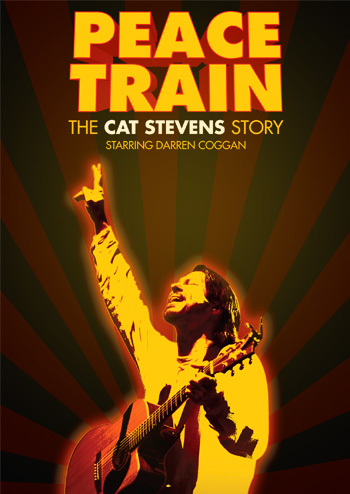